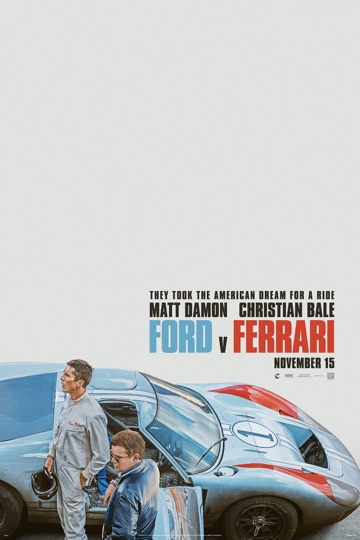 FORD V FERRARI, also known as Le Mans ’66, hit theaters in November 2019 starring Matt Damon as Carroll Shelby and Christian Bale as Ken Miles. What inspired Hollywood, 40+ years later, to recreate this moment in time? Some would say it was the 2016 documentary “The 24 Hour War”, which chronicles the fierce competition in the 1960’s between Ford and Ferrari, culminating in the 24 Hours of LeMans title. The film features interviews from every big name in racing, like: Mario Andretti, Edsel B. Ford II, Bob Bondurant, Peter Brock and Piero Ferrari, to name but a few.

After a soured deal with Ferrari, Henry Ford II backed an all out assault on Ferrari’s racing team and called in the big guns, AKA Carroll Shelby. Ford took note of Shelby’s racing success in 1965 and provided the money and means Shelby was lacking. That’s where the film FORD V FERRARI begins. Lee Iacocca of Ford tasked Shelby with building a race team and race car prototypes that could beat Ferrari, in just 3 months. What was Carroll’s response? ‘I need Ken Miles’!

Ken Miles - One of the Greatest Racers of All Time

Ken Miles was born and raised in England and fought in World War II as a Sargent. Previous to the war he raced motorcycles and after the war he stepped into the four wheel racing scene as both a racer and engineer. At that time 1 in 4 racers died within a year but Ken made it decades, all the way to the racing scene of the 1960’s.

Ken Miles was known as a passionate man with a wicked sense of humor, but also ‘difficult to work with’. That didn’t phase Carroll Shelby though, he was in it to win it and Ken Miles was exactly what he needed to seal the deal. Ken and Carroll had already worked together to build the World Champion title holder of 1965, and most iconic vehicle of the 20th century, the Daytona Shelby. However, when the FIA changed their rules for 1966 the Daytona Shelbys were shelved indefinitely and Shelby and Miles began work on the Ford GT40. Their experience and ingenuity brought Ford international status in 1966 and forever changed the game.

We could sit here all day and talk about the Daytona Shelby Coupe and the Ford GT40, but in short: It doesn’t get any better in America’s history than these cars! In fact, to illustrate, an original Daytona Shelby (there are less than 8) sold at auction in 2009 for almost $8 Million and in 2016 a 1966 Ford GT40 Mk I sold for nearly $5 Million.

These are rare cars indeed. Even if thousands had the money for a Daytona or a GT40, there simply are not enough to go around. Thankfully Shelby American began producing these models as component cars (also sometimes called car kits). At Classic Cobra, you can order the chassis and engine separately to recreate the original Cobras and GT40s or customize your own. Check out your options here!

Who is the only American manufacturer to win the FIA World Sportscar Championship? Shelby American

What was the car that beat Ferrari? Ford GT40

What car was Shelby leaning against in the trailer for FORD V FERRARI? How can I locate one of these? GT40 MKI... click here for more information.

Who was the driver that won Le Mans in 1966, but was later moved to second place? Ken Miles